As Father’s Day approaches, I wanted to remember that his whole parenting thing is a partnership. I write about me and my own parenting highs and lows, but it’s not always about me (though my lovely hubs would beg to defer).

With Ainsley being our first and only, and her being 17 months old, we’re still pretty new at this parenthood thing, and experiencing everything for the first time. Adam’s been pretty patient with my anxieties and stresses. He puts up with my over analyzing her eating habits, my questioning if she can wear shorts without skinning her knees, if shoes are too big, if her cries at night mean I need to scoop her up and hold her or if she’ll fall back asleep. My style of parents is somewhere between “let her figure it out on her own,” to “holy shit, I can’t sleep because I’m so worried about her figuring it out on her own.” Adam is the middle ground in between all that worry and excitement. He steps back and lets me have control for most of this parenting ride, but gets in the driver’s seat when I need him there.

The moment Adam first held Ainsley, I knew he would protect her and let nothing terrible happen to her. I watched his face change, his lips slide into a smile, his eyes getting watery. He held onto her with every ounce of strength he had. While I was recovering from my C-section, he was with her. He changed all the diapers for the first 24 hours since I couldn’t get up. That also meant bringing Ainsley to me to breastfeed – something that seemed to happen every fucking minute. We squeezed into the hospital bed together, us taking turns holding her. That moment I watched him become a dad. They say women become a mother the moment they become pregnant, but I don’t think men truly feel fatherly until the moment they hold their babies. 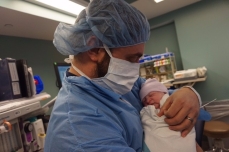 When we first found out Ainsley was a girl, I cried big ole tears of happiness. I couldn’t contain my excitement, but Adam’s unsureness was just as visible. Our ride down the elevator after leaving that ultrasound was filled with conversations of our little fetus dating, meeting boys and Adam buying a gun. The same little fetus that was smaller than an avocado was going to apparently come out of the womb dating boys like Johnny Depp and John Mayer, so Adam was going to start stocking our house with weapons. But alas, this is how dads with daughters think.

I never felt like that with my own dad, but he was protective and worried in his own way. My dad is very emotional and sentimental, too. He’ll randomly text me with memories, or give me something from ages ago that he kept “just because.” On my desk at work, I have a postcard my dad mailed me in 2013 of the Philadelphia City Hall, something we climbed together. I also laminated the label from a shirt that he literally wore to threads and keep it in my wallet (a mint green Danny Tanner shirt from the early 90s). 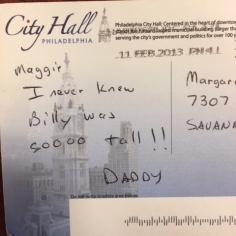 When my first high school boyfriend kicked me out of his house for not having sex with him, my dad rushed over to pick me up (very traumatic experience – fucking terrible ex-boyfriend). He supported my venture into art school when other parents would have cringed. He taught me how to check my oil, appreciate art and history, and how to tie-dye a shirt. He’ll kick anyone’s ass at trivia, and his most important piece of advice has been to “always know your surroundings,” something I think of often.

As I think of my own husband as a father, I envision him getting Ainsley interested in cooking, just like him. And also getting her interested in Greek culture (the food, dancing, family stories), something that I always enjoy when we get together with his family. She already have his love of music and dancing. This girl can hold a beat! We both hope she has his eye sight and skin. I dread having her go through what I went through with terrible skin in high school.

And she has his feet, which he doesn’t think is a big deal, but it is. My feet are ugly (I have my grandmother and great-grandmother’s feet, thank you ladies). I know he’ll read this and think why are you writing about us having matching feet, but I love it. People look at Ainsley and me and say we look alike, but it’s just because she has blond hair, fair skin and blue eyes. I haven’t found a physical feature of mine that is identical to her. But she has Adam’s feet. They are identical, and I hope her feet take her wherever she wants to go in life, knowing her feet are strong like her daddy’s.

One thought on “Carried by Daddy’s Feet”